Wildlife at the Farm

Wildlife at the Farm

The approximately 365 acres of Adams Farm and 300 acres of additional abutting open space provide a superb refuge for regional flora and fauna along with space for seasonal visitors.

An abundance of feathered creatures frequent the Farm. Special accommodations have been provided for resident bluebirds in the form of wooden birdhouses by Friends of Adams Farm member Bob Hennessey.

As spring approaches, there is no better time to visit Adams Farm to look at and listen to the many different birds that arrive to either raise families or rest up as they migrate further north.

Mid-May is the height of the breeding season at the Farm and you don’t have to go very far to see some of our star performers. Just step out of your vehicle in the parking lot on a sunny morning and look for an all white and black bird fluttering over the fields singing a bubbling metallic song and you have found a Bobolink. This bird builds a nest suspended on the tall grass deep in the fields.

The many birds either sitting on the wire fence or flying over the fields like little jet fighters with metallic blue backs and white bellies are Tree Swallows. They catch insects in the air and raise their young in the nest boxes along the fence.

There is also a very good chance of seeing one of our favorite stars, the Eastern Blue Bird. Look for a bird with the brightest sky blue you have ever seen on his back and a reddish-orange patch on his white breast. He sings a short but cheery song.

All these birds and many more, like bright orange and black Baltimore Orioles, Eastern Meadowlarks, Red-winged Blackbirds, Grey Catbirds, Barn Swallows and Yellow Warblers can be seen by taking only a few steps from your vehicle early on a spring morning.

By walking a short distance up the main trail to the back field where the trees line the trail and you just begin to enter the woods, you may catch a glimpse of a fiery red bird with black wings high in the tree tops singing a loud robin-like song, the Scarlet Tanager. Another beautiful singer you may find hidden in the tops of the trees is the Rose-Breasted Grosbeak. His song is the richest of the robin-like songs. He sounds like a robin who has taken singing lessons.

Once you are well in the woods along the trail, you will most likely hear instead of see the birds that nest in the deep woods. By far the best singers of all our birds are the Wood Thrush and the Hermit Thrush. Their flute-like enchanting songs ring through the deep woods. Unfortunately they are also rapidly vanishing from the woodlands, especially the Hermit Thrush which is at the head of the singing class. An easier-to-spot songster of the woods is the Eastern Towhee who sings a song that sounds like he is singing “Drink Your Tea”. Another bird who is heard but rarely seen is the Oven Bird. This bird belongs to the Wood Warbler group and got its name from the Dutch oven-shaped nest it builds on the ground.

There are many more birds to see throughout the various habitats on the Farm from our familiar backyard birds like the Chickadee, Cardinal and Titmouse to the most diverse and varied group of all, the Wood Warblers. Enough to challenge the most knowledgeable bird expert!

So take a stroll along the trails with a field guide in hand and see how many of these flying jewels you can identify.

Although there are many different birds at Adams Farm, they are only a fraction of the birds that used to inhabit the eastern forest. Many of the neo-tropical birds are gone, probably forever, from our area. Neo-tropical birds are birds that breed in the north and then winter down in South or Central America or in the Southern United States. Their sharp decline is mainly due to loss of safe breeding habitat up here in the north and loss of valuable wintering habitat down in the tropics. The fragmentation of our northern forest creates less dense stands of deep woods and more “edge” habitat where developments and yards abut woodland areas. These edge zones make it easier for predators to prey on nesting birds. Raccoons, skunks, foxes, and especially house cats hunt along these edges. Also with the loss of land comes the loss of food sources for these birds.

The migrating birds also face many obstacles on their way back and forth from their breeding grounds in the north to their wintering grounds in the south. High tension wires and windows on tall buildings have become some of the newest dangers that have popped up on the landscape. These, combined with fewer habitats along their migration routes to rest and feed, have taken their toll on the migrating bird population. Some of the hardest hit of all seem to be the many different Wood Warblers and Woodland Thrushes.

To compound the problem, slash and burn practices and an ever-increasing population in the tropics contribute to the rapid loss of the good wintering habitat the birds need to survive. There is no easy answer to stopping the decline of our native song birds. The demand for more development and space to build houses is only going to increase in years to come, and unfortunately our many varied native song birds will have to pay the price.

This is why it is so important to set aside places like Adams Farm to help slow the decline of our remaining native song birds.

The colonists' beloved bird, the Wild Turkey, was severely affected by woodland destruction and hunted to elimination in the Commonwealth. The last known native bird was killed on Mt. Tom in 1851.

However, thanks to restoration efforts starting in 1914, the state now supports a resident population of over 1,000,000 wild turkeys.

Adams Farm and the surrounding area are home to several thriving flocks.

The following is a partial list of mammals sighted or known to reside on Adams Farm. Links provide additional information via the Massachusetts Division of Fish and Wildlife. If you experience a unique sighting or wish to share information, click here.

Keep your eyes peeled for many colorful varieties of mushrooms, lichens, ferns, and moss at the Farm. Challenge yourself to find as many kinds as you can! We’re always looking for great pictures for the web site. 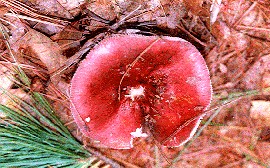