The original perimeter fence around the Community Garden at Adams Farm was installed in 2009 when the Garden was first created.  At that time there were 32 plots in the Garden.  Each year for the next two years, 16 additional plots were added to the Garden and the perimeter fence was expanded accordingly to encompass all 64 plots. 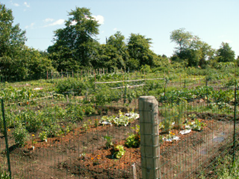 In early 2020 the Community Garden Management Committee approached the Friends of Adams Farm (FOAF) Board of Directors to request funding for a new perimeter fence since the existing fence was wearing out. The gardeners complained of damage to their crops from small rodents that were able to enter the garden through gaps in the fence.

The cost of a new perimeter fence proved to be prohibitively high, so FOAF initially opted to replace the gates in the existing fence as a first step toward solving the rodent problem.  In the fall of 2020, the FOAF Board of Directors applied for a grant from the James Underwood Crockett Fund to cover a portion of the cost of a new perimeter fence around the Community Garden.