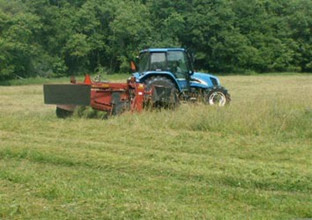 If you’ve visited Adams Farm, your eyes were probably drawn to the beautiful flowers in the Butterfly Garden or the well-tended plots of the Community Garden.  But have you ever wondered who takes care of the open fields at the Farm?  We don’t often talk about the haying process, but without it, the pristine open fields at the North Street entrance to the Farm with their wide-open vistas would soon become overgrown.

The fields at Adams Farm are mowed for hay twice a year, once in June or early July and again in mid-September.  In total, there are 25 to 30 acres of fields at the Farm that produce approximately 2,000 bales of hay each year.  Haying the fields can take anywhere from 2 to 3 days, depending on the weather and humidity levels.  Although you might think this would be a costly endeavor, it doesn’t cost the Friends of Adams Farm (who pay for the maintenance of the Farm) a penny.  Let’s take a closer look at the haying process. 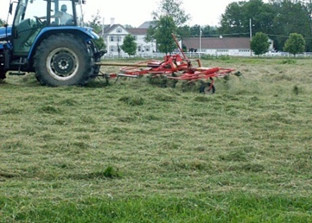 The first step in the process is the actual mowing.  A tractor drives through the fields, using an attachment to cut the grass and roll it into rows.

The second step is teddering.  The tractor passes over the fields again, using a different attachment which mixes two rows of mown grass together, throws them up into the air, and drops them flat to dry.  Teddering aerates the hay, allowing it to dry better, which results in improved aroma and color.

Next comes raking, where a special attachment moves the hay on the bottom of each row to the top, creating fluffy windrows that are 1½ to 2 feet high.  The tractor then makes a final pass over the fields, pulling a baling attachment that turns the windrows into bales of hay and tosses them into a cart behind the baler. 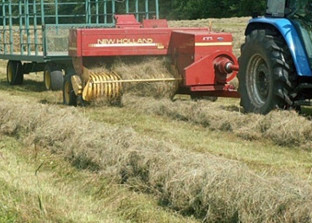 Weather is a big factor in the haying process.  If the weather is hot and sunny, two dry days are all it takes to complete the haying at Adams Farm.  The fields are mowed the first day, and the next day the hay is teddered in the morning, raked at noon, and baled in the late afternoon.  However, if the day is overcast or the humidity level is high, the process can take three days.  On the first day, the fields are mowed and teddered.  The following day, the hay may be teddered again to aid in the drying process, and later raked.  On the third day, the hay is baled.  Ideally, the fields should be cut when it’s hot and dry, so that the hay only needs to be teddered once.  The more the hay is moved during the haying process, the more protein is lost, lowering the nutritional value of the hay.  The hay also loses color due to more sun exposure.

Some of you hikers and dog-walkers may have noticed a tractor mowing erratically in the back field of Adams Farm earlier this summer and wondered whether the man behind the wheel had had one too many.  The tractor driver wasn’t drunk; he was trying to improve the quality of the hay in the back field.  Those who have hiked at the Farm for many years may remember when the back field was covered with more milkweed than grass.  Mowing down the areas that are heavily infested with milkweed prior to haying the back field has allowed the good grasses (Timothy and Orchard, for example) to replace the weeds, increasing the amount of hay the Farm can produce.  Adding lime and fertilizer to the fields also helps improve hay quality.

So how much does all this cost?  Here’s where keeping the front fields at Adams Farm in good condition pays off.  While the Friends of Adams Farm must pay to brush-hog (rotary cut) the rough fields behind the barn to keep them from becoming overgrown, and pays for the lime put down in the fall of the year, Coursebrook Farm does the haying of the level fields for free in return for the hay.  Coursebrook, a stable in Sherborn, uses the hay as fodder for its horses, and also sells some of it to Mor Linn Farm, a new stable in Walpole just down the street from Adams Farm.  As long as we maintain the quality of the grass in the fields at Adams Farm, the haying can go on and the wide-open vistas of the front fields will continue to greet visitors to Adams Farm.