In early September, the Norfolk Hunt Club hosted a drag hunt at the Farm, attended by approximately 30 smartly-dressed horsemen and -women and their mounts.  This is an annual event, open to the public.  Early risers can watch the beginning of the hunt as the hunting horn is blown and the horses go galloping off after the hounds.  Latecomers can welcome the riders back at the end of the hunt as the horses and hounds find their way back to the barn.  Drag hunts have been held at the Farm for many years, and at one time followed an even longer course through properties abutting the Farm. 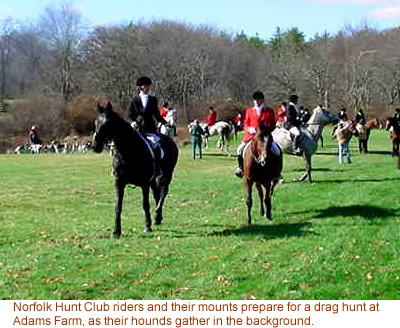 The drag hunt is aptly named, since a scented lure used to be dragged along the ground to create the trail that the hounds follow during the hunt.  At this year’s drag hunt, however, two or three “foxes” walked around the Farm to lay the trail about half an hour before the start of the hunt, spraying a mixture of fox urine and glycerin which helps the scent adhere to the grass.  Timing is important, as once sprayed, the mixture begins to evaporate.  For this reason drag hunts are usually held during the morning hours when the temperatures are cooler, slowing the evaporation process.  The best days for drag hunts are misty, foggy, even murky days where the high humidity promotes a stronger scent on the trail.

The hounds that run in the drag hunt are bred for the hunt.  They’re either American or English Foxhounds or crosses of these two breeds, and their lineage is very important.  The Norfolk Hunt Club has 40 hounds that live in a kennel at the Hunt Club stables.  It’s the oldest operating hunt club kennel in the U.S., having housed hounds since the turn of the last century.  The hounds are cared for by a huntsman who lives onsite with them and exercises them daily.  The hounds and horses travel together to drag hunts.  After the hounds are released, they’re supervised by four or five whippers-in who know the route of the hunt and keep the hounds in line.  It’s important to make the hunt interesting for the hounds, who are rewarded with kibble when they reach the end of the trail.

The main hunt season for the Norfolk Hunt Club starts in the fall right after Labor Day and consists of roughly 30 drag hunts.  This season is three months long, starting with shorter hunts to avoid injury to the hounds and horses, and then gradually increasing in distance as the animals become fitter.  Riders must be invited to their first drag hunt to ensure that they have sufficient riding skills to participate.  Once they’ve ridden in a hunt, they can subscribe for the season.  The Hunt Club holds drag hunts on Tuesdays and Saturdays.  The Tuesday hunts usually involve about 30 riders and last an hour or so.  The Saturday hunts are more popular, with 30 to 35 riders participating in these two- to three-hour events. Following the Saturday hunts, refreshments are usually served, either at the site of the hunt or somewhere nearby. 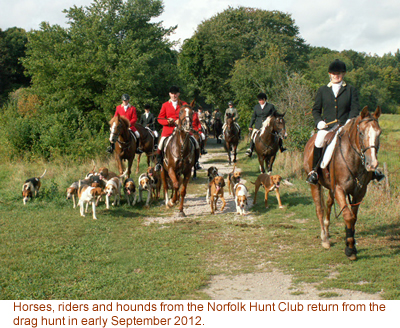 A shorter spring hunt season runs from mid-April to mid-May.  About ten drag hunts are held during the spring season.  They’re shorter in length than the fall hunts and are held until the weather gets too hot.

Participants in the drag hunts must wear proper attire.  Beginning riders can be identified by their black riding jackets.  Men who have earned their “colors” (proven their skills as riders) are allowed to wear scarlet jackets.  Women who have earned their “colors” sport green collars on their black jackets.  No scarlet jackets are allowed before the official opening of the fall hunt season in late September or early October; tweeds are acceptable attire for pre-season hunts.  Staff members wear formal attire all year long.

Each hunt club has its own territory.  In addition to Adams Farm, the Norfolk Hunt Club holds drag hunts at a variety of locations in Norfolk County, South Dartmouth and Buzzards Bay.  Members hail mainly from Dover, Medfield, Sherborn and Walpole, and come from very diverse backgrounds.

Hunt Club members love the land and are great advocates of open space and conservation.  They regularly contribute to the upkeep of the areas that host their drag hunts, Adams Farm included.  If you haven’t done so already, we invite you to come to the Farm next fall to join in the excitement of Norfolk Hunt Club’s next drag hunt.