I spent six years growing up on Hillcrest Farm on North Street in Walpole directly across the street from Adams Farm. I was twelve when we moved to Walpole in 1955, and I graduated from Walpole High School in 1961. Last August I participated in my 50th class reunion. During this celebration I took a drive down memory lane (North Street) and learned of the 1997 purchase of Adams Farm by the town of Walpole. 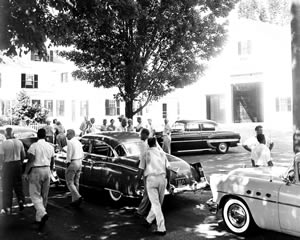 Since then I have learned more about how Adams Farm evolved and the dedication of the Friends of Adams Farm to its preservation. In November I met with Ralph Knobel and he introduced me to his friends who now own and reside at Hillcrest. Thanks to their hospitality, I was able to revisit the ‘old farm house’ and barns, and catch up on changes over the past fifty years. I shared several old photos depicting some of the prize Hereford cattle being ‘shown’ on a particularly sunny day sometime in the late fifties.  At Mr. Knobel’s request, I would like to relate some of my memories and experiences growing up on North Street “back in the day”!

My father had been working on a farm located in Warren, Massachusetts, where he was engaged in breeding and raising registered Hereford cattle. He was a herdsman and years before had attended the University of Connecticut where he studied animal husbandry.  For reasons beyond our control, the farm was being sold and the cattle auctioned off to other Hereford breeders in New England and New York. It was my family’s good fortune that Mr. Kenneth Isaacs of Walpole hired my father as his new herdsman to further develop his growing population of Herefords.

When my family moved into Hillcrest, Mr. Isaacs owned three farms on North Street, including his family’s residence at 1150 North Street. Each farm had its own barns and pastures and certain fields were designated for haying. Grass was mowed, dried, baled, and stored in the barns for winter feed. Mr. Isaacs employed a farm manager, Fred Wilson, to supervise most of the farm operations:  maintenance of equipment, fencing, haying, fertilizing, etc. My father was primarily responsible for the breeding and nutrition of the cattle. Each member of the herd had its own pedigree, defining generations of ancestors and blood lines. Several students from the Norfolk County ‘Aggie’ School worked on the farms, rendering assistance whenever needed.

Life on the farm always seemed to offer something new and interesting – I don’t think the word ‘bored’ was in my vocabulary then. To be sure, there were routines and daily chores necessary for the care and feeding of the animals. I believe that at this time the herd could have numbered 75 to 100 cattle, and they were spread out over all three farms. In late spring and early summer, most of the cattle were ‘turned out’ to pasture for the next few months. After being cooped up in the barns and barnyards for so long, you could almost feel their delight as they strode through the gateway into a pasture knee deep in lush, green Timothy clover and alfalfa.

The pasturing of the cattle substantially reduced the time spent on their daily care.  However, the summer haying operations soon began, and by the beginning of fall the barns would be full of bales of hay to sustain the livestock through the long winter months.  As I grew older, I was able to drive the tractors (John Deere #620 and #730 and an older Farmall) which pulled along teddering and crimping machines designed to dry the grass after mowing, prior to baling.  This was important to prevent mold from growing, as well as to prevent heat from developing in the bales to a point where barn fires could spontaneously ignite.  In the fields, the bales of hay were loaded onto a wagon which was pulled by tractor to one of the barns.  The bales were then tossed onto an escalator which carried them to the second- and third-floor lofts.  Stacking the bales upstairs became your job when you “drew the short straw”.  The air was full of chaff which made breathing difficult, and on a hot summer day in the 90- to 95-degree temperature range, the lofts could easily reach 110-120 degrees.  As soon as the wagon was empty, we returned to the field for another load while keeping an eye out for any dark clouds that might develop, as rain was not a farmer’s friend during the haying season.  At the end of a ten- to twelve-hour day of haying, a swim in the lake was a wonderful treat.

Building fences was one of the significant ongoing jobs on the farm.  I do not know who designed them, but the fences visible from North Street were built to look good and last a long time.  Post holes were dug down 48 inches and spaced every ten feet, either using an attachment on the back of the tractor or by hand.  When the mechanical digger bored into rock or ledge, which often happened, the manual approach with shovel and crowbar was necessary.  Occasionally the 48-inch depth could not be achieved, so a chainsaw was used to cut off 6 to 8 inches of the post.  The posts had all been soaked in creosote to resist decay.  One of the many daily chores was turning the posts that had been soaking upside down in barrels of creosote.  Tongs attached to a pulley were used – very carefully – to accomplish this, as creosote touching the skin was to be avoided.  Once the posts had been planted in the ground, 2″x 6″ planks were attached to the posts by securing each end with two 6″ lag screws.  The planks were painted white and the end result was a solid and attractive barrier.

Growing up on North Street was not entirely about work.  During the school year, my energy was primarily focused on schoolwork and sports, along with limited chores before the school bus arrived and upon returning home late in the day.  I also mowed lawns for the Stevens and Warren families whose homes were on either side of Hillcrest.

There is one particular boyhood experience that I remember vividly, and have retold numerous times. Dogs and cats were commonly found on most farms, and one day my family ‘inherited’ a small puppy only a few days old.  She fit into the palm of your hand and was a cross between a poodle and a Labrador.  We took turns feeding the puppy milk through an eye dropper.  A few days later our cat delivered a batch of five or six kittens in the hay mow.  As was her custom, she had disappeared for a couple of days before finding me and proudly taking me to where the kittens were hidden.  At this point my mother suggested that I fill a basket with hay, place the kittens in the basket, and – since it was wintertime – bring the basket into an unused but heated part of our house.  While the mother cat was off hunting, we placed the puppy into the basket.  They were all so small, it was difficult to tell the difference between the puppy and the kittens.  I don’t think the kittens’ eyes were even open.  Toward the end of that day, I brought the mother cat into the house and she leaped into the basket.  I could not believe the sight of the kittens – and the puppy – nursing so contentedly while she took turns licking each one so naturally.  This went on for several weeks, and much to the mother cat’s dismay, the puppy grew at a much faster rate than the kittens.  They always remained ‘family’, and I never fully understood the expression “they fight like cats and dogs”.

My time living, growing up, and working at Hillcrest was an experience that I appreciate more and more with the passing years.  The combination of Mother Nature, the land, the animals and the people created an environment of cooperation and responsibility.  Hillcrest Farm will always be a special place for me and I will always feel most fortunate to have been raised there.